I am terrestrial creature. I have spent much of my life walking, hiking and biking across the land. I like to move under my own power, using my body to propel myself through the wilderness.

So when my husband Curt bought a boat, I had my hesitations. I’m not particularly mechanically inclined, and in the past I’ve preferred my water adventures in canoes and kayaks. Until two years ago, my experience on the water was limited to a few boats on lakes and an occasional ferry ride.

But once we got our boat and spent a little time on it, we started taking it to Cedar Key. And my world grew bigger.

It’s a straight shot from Gainesville to Cedar Key, following the old railroad bed. At first you pass trees. Then you drive onto a causeway and you pass by water dotted with small islands. Then you drive through the small town of Cedar Key to the dock, and suddenly you realize that you’re on the very edge of the world.

Beyond the dock at Cedar Key, you see a few islands and the Gulf of Mexico. The Gulf stretches for as far as the eye can see, which is about six miles. You put the boat in at the dock, putter out past Snake Island and Seahorse Key, past the last marker. And suddenly you are surrounded by nothing but water.

The first time scared me a little. I found myself calculating the height of the waves and how far I could swim. But I also took in the beauty of the swells and the one thousand shades of blue contained in the water. I felt the quiet of the day, an occasional bird passing by, the startling contrast of a fish splashing above the silent liquid surface.

As we spent more time in the Gulf, I learned its moods. Some days the water stretched out softly like a great blue blanket, its surface broken only by an occasional dolphin or turtle. On these days, you could see below the surface to the grass and sand beneath on Seahorse Reef. Sometimes we saw jellyfish floating by on tides. Other times we saw fish swimming between grassy patches. On other days, the wind would create white-tipped swells and the water would turn gray and opaque. 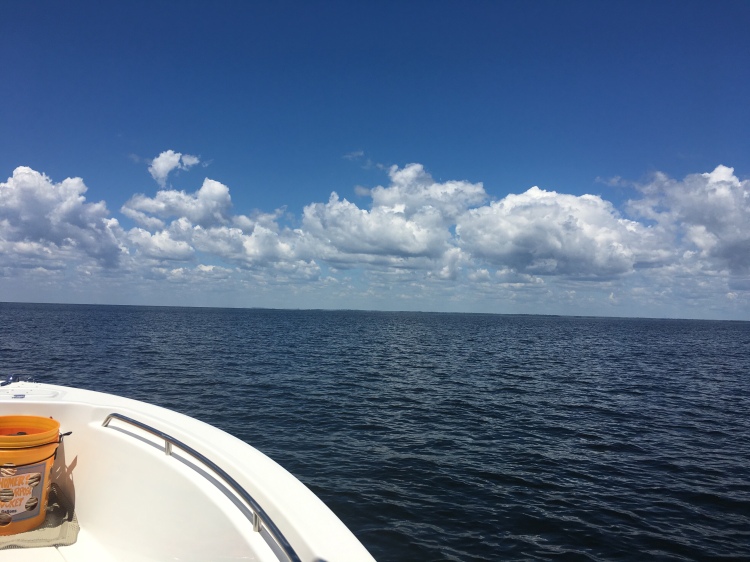 The mornings often started clear, with few clouds anywhere. As the day grew long, you could see white puffy clouds forming over land. Sometimes they would coalesce into a thunderstorm. Other times, they just formed and dissipated over time.

We saw dolphins and turtles and tarpon and bait balls — hundreds of tiny fish that swirl and swim together in hopes of avoiding predators. Once I jumped off the front of the boat into a bait ball on a clear summer day. It was like swimming in a fishnado. Another time, we saw two separate pods of dolphins, and the day was so quiet you could hear their high-pitched calls. The two pods joined up and moved off in the same direction together.

We saw pelicans and seagulls and cormorants and osprey diving for fish and flying from one undisclosed location to another. We saw an occasional butterfly and wondered at its ability to travel so far out to sea to our boat.

We snorkeled and fished and sometimes just sat and stared at this seascape for hours. We went at sunrise and sunset and on Dec. 31, 2016, we took the boat out at 10 p.m. and rang in the New Year about 3 miles out to sea. You could not see the constellations for all the stars that appeared in the sky that night.

Last week Curt and I took our boat to Cedar Key for the last time. We saw dolphins breaching in shore as we made our way out of the channel. The skies and water shone in the deepest blue. At Seahorse Reef, you could see all the way down to the ripples in the sand and distinguish between the lighter sand and the dark patches of grass. A light wind skittered across the top of the smooth water, causing tiny ripples. A few puffy clouds gathered in the distance.

I’m grateful that I got to see the world from another perspective. Cedar Key has broadened my horizons and while we have said our goodbyes, I will carry it with me wherever we go.