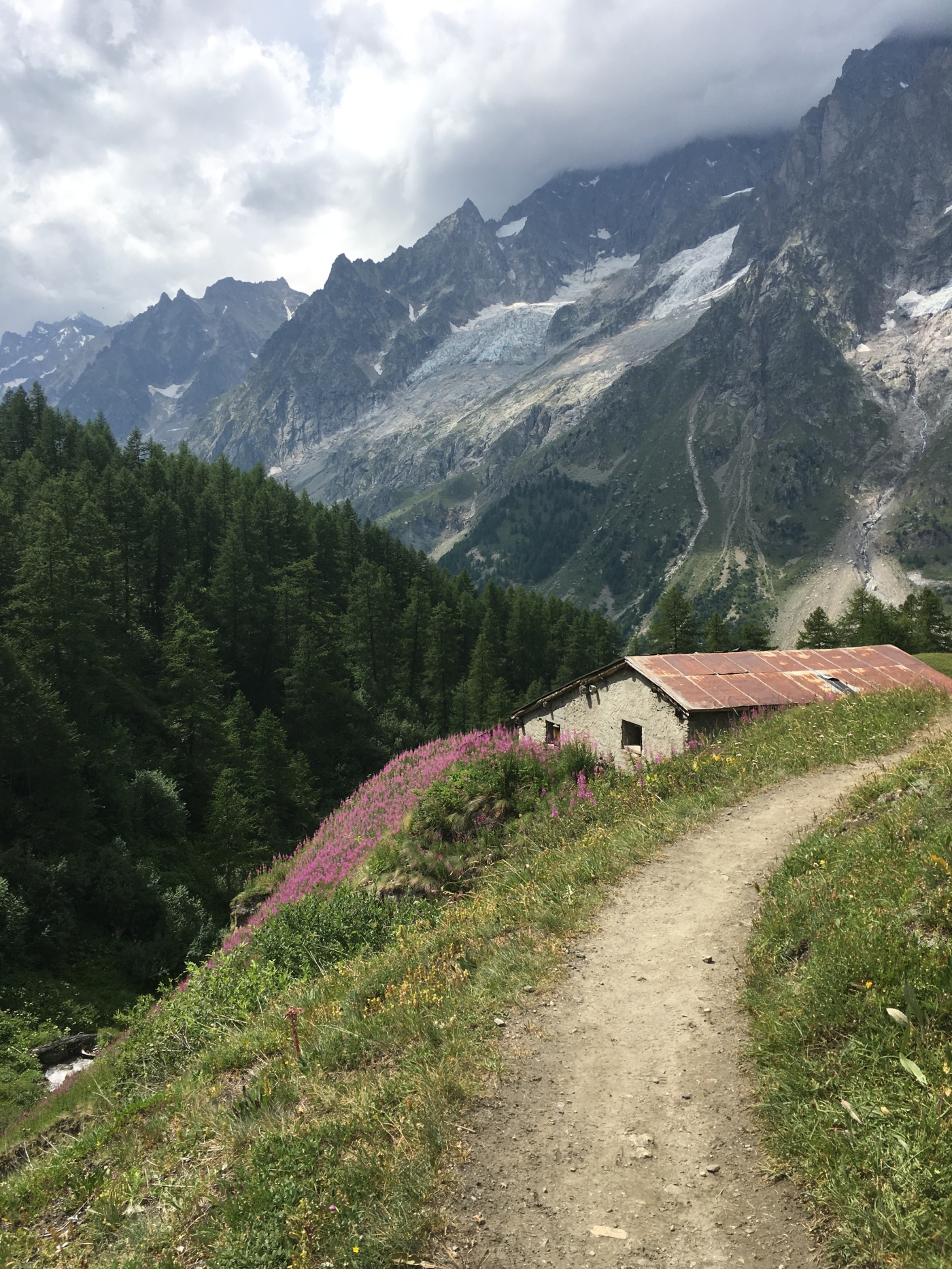 The day after our thunderstorm and hail experience dawned clear and bright to reveal our refuge on a saddle above the town of Courmayeur, Italy. Our clothes and shoes, soaked the day before, had not quite dried out, so we laid a few things out in the sunshine and sat on the deck for a while reading while we allowed the hiking boots and rain gear to dry.

We hiked down to the telepherique and took the cable car down to Courmayeur. The small town nestled in a valley among stunning peaks is a tunnel away from Chamonix. We found a small local shop and bought our lunch for the day: Salami, emmenthal cheese, a baguette, dried pineapple and cashews and some chocolate.

Even with a small guidebook, two phones and topographic maps, we were uncertain of exactly how to get from the little shop to the trail. We took a few wrong turns and backtracked a few times on the winding streets. Finally, we saw a man leading a group of mules that had been packed with a group’s supplies. Emile asked him in French if he knew the way to the trail out of Courmayeur and he said, “Follow me.” We followed him through a charming city park, mules clomping loudly beside us. The park had statues and fountains and green grass, and families walked along nearby paths, avoiding the mules and us as well. We finally came to the end of the park in a hamlet called Visaille, and the man pointed up the road. We thanked him and parted ways with men and mules.

We walked up the road, and then the road became a trail again, and the trail climbed straight up the mountainside to the Refugio Bertone, which boasted spectacular views of Mont Blanc, Italian peaks and the saddle where we had spend the night before. We sat and ate our lunch in the sun, enjoying the breathtaking view.

Although the way to Bertone had been steep and difficult, I felt I had finally hit my stride. I took my time, elongated my strides and regulated my breathing so I never felt tired. I stopped fewer times than before and felt well-rested throughout the process. I was gaining confidence as we walked.

The afternoon hike opened with views down the valley back to Col de la Seigne, with Mont Blanc and the other peaks right across the valley. We stopped to pick blueberries, which had ripened on the side of the trail. An occasional bright pink blaze of wildflowers covered a nearby hill. At one creek, a host of all different sizes and shapes of brightly colored butterflies congregated in the muddy shallows. We passed picturesque ruins overtaken by the weather and wildflowers.

Late in the afternoon, I was tired. I wanted to take a break. Emile suggested going around one more corner, and there above us was our refuge for the night, Refugio Bonatti. We climbed up the hill, settled in, did yoga, showered, cleaned and hung our clothes, and went to pet the playful kittens who were hanging about outside.

At dinner, we sat next to a French woman who was a Spanish professor from Annecy. She and her family had come up to the refuge for a three-day weekend. We also sat across from a couple from Spain who spoke no English or French, so the evening’s conversation took place in Spanish. A thunderstorm blew through while we were safe and comfortable at dinner.

As we were getting our clothes ready for the next day, I realized that I couldn’t find one of my t-shirts. And as I looked for it, it dawned on me that I had left it on the side of the building that morning  when we left La Maison Vieille, along with a pair of hiking socks. It was the only loss of the trip, barely even noted when weighed against the confidence gained in hitting my stride.