From our hotel in Les Contanimes, you could see, far in the distance, a distinctive peak that looked a little like a jaunty cap on top of a monolith. It looked like it would take a while to drive to that peak, and it was about half of what we were going to do that day. I tried not to think about how far it looked, and instead put one foot in front of the other.

We started the morning in a drizzle, but soon the clouds burned off and and soon we were donning our sunglasses and slathering on sunscreen.

For a while we walked along an old Roman road and over a Roman bridge that crossed a beautifully carved slot canyon. We passed through fields and forests.

And as we walked, the Col du Bonhomme seemed to get closer. For a while, the trail wound peacefully and slowly uphill. We passed carved wooden troughs with fresh alpine drinking water. We hiked through fields of beautiful wildflowers — pink, yellow, white and blue. We passed more cows and horses. We saw distant waterfalls and the remains of the foundations of houses from another era — stones still standing in the shape of square rooms. 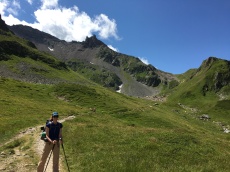 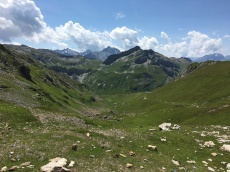 The trail led right up and out of the valley, and then seemed to climb straight up the side of the mountain. Once again, breathing became a challenge, we began to sweat and we felt the leg muscles as we climbed. The last part in particular required focused attention. A single rock or patch of loose dirt could have turned an ankle or caused a fall. Everything else fell away as we focused on our next step.

We climbed about 3,600 feet out of that valley, and as we paused for the occasional water break, we looked back down where we had been, amazed that our feet had taken us so far. When we finally reached the top of the pass, we could see a valley plunging down on the other side. That tiny cap we had seen from below now loomed above close by. We could see a new set of mountains rising from the earth. It took our breath away.

At almost 8,000 feet, it felt chilly at the top of the pass, and a brisk wind blew, so we put on our down jackets and hats and sat down to eat lunch and enjoy the view.

After eating our sandwiches and resting for a while, we continued to climb to the Col du Croix du Bonhomme, the highest point of the day. I began to feel my “trail legs,” and could better navigate the rocks and ups and downs the trail put before me. When we got to the peak, another spectacular view awaited us — along with our descent into Les Chapieux. The descent would be almost as far as the climb.

On the way down, we passed a massive herd of sheep, branded with small red hearts on their flanks. We saw a small stone house that looked as if it had been part of the hillside for centuries, and a few more stone ruins. Time stood still in the valley — it could have looked substantially the same 600 years ago.

We arrived at Auberge de la Nova at 4:30 – it was our first dormitory of the trip. There was a beer garden outside, so we were able to relax for a while before dinner. We were in a room with eight bunk beds. The other couples in the room hailed from Russia, Sweden and Norway, and we had dinner at a table with some of the couples from Norway and Sweden. During dinner, a storm swept through the valley, bringing hard rain and the first rainbow of the trip.  A beautiful end to the longest and hardest day so far on the trail – 12.5 miles and thousands of feet up and down.

Next: TMB Part 4: France into Italy