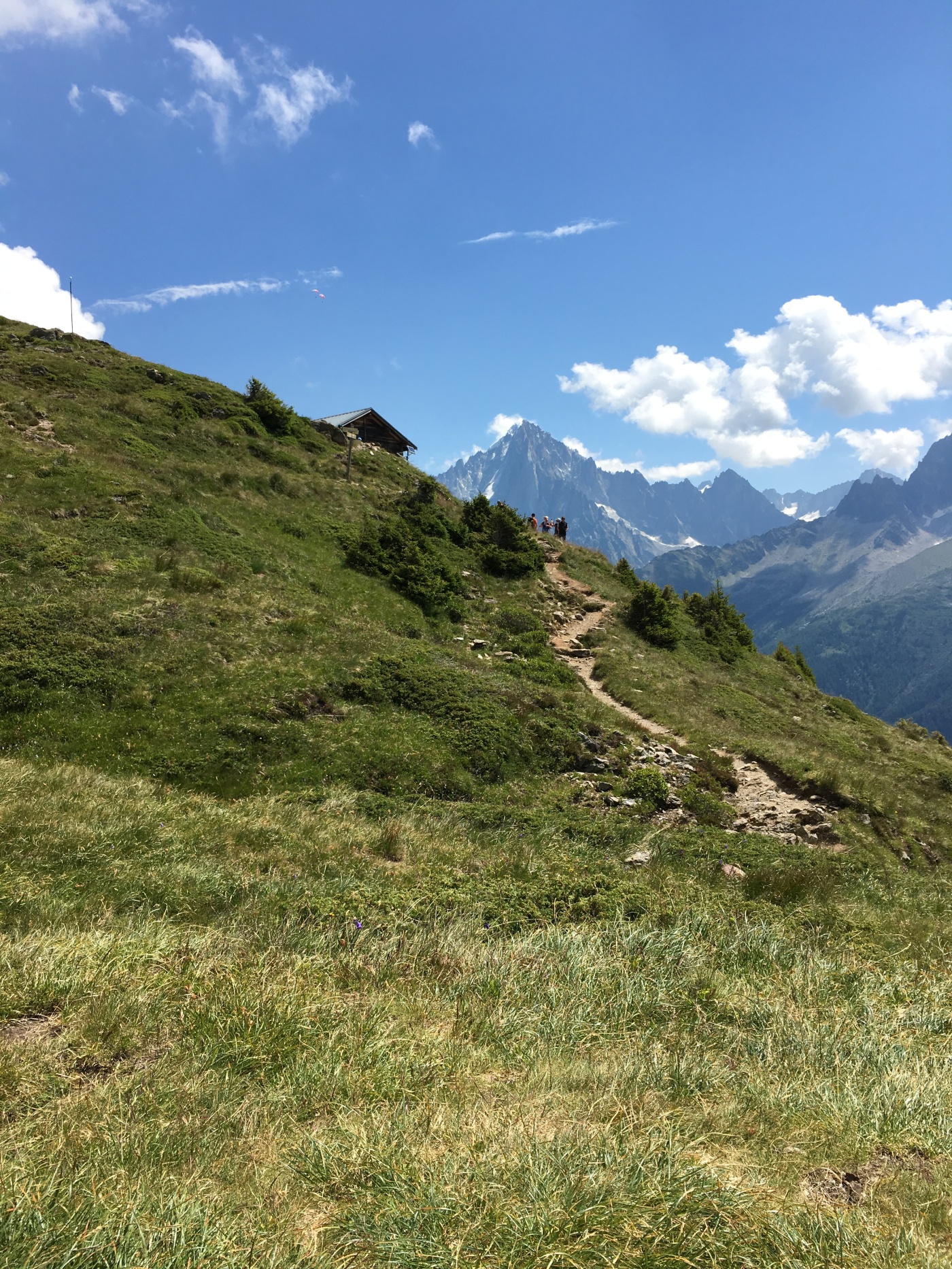 My son Emile and I started our tour du Mont Blanc in Chamonix, nestled at the base of Mont Blanc on the French side of the mountain. The town teems with an eclectic mix of locals, outdoor enthusiasts and high flyers wearing expensive leisure wear. Every outdoor company imaginable seems to have a storefront here: Patagonia, Arcteryx, North Face, Mammut, Helly Hansen and many more. Paragilders descend into the valley like giant butterflies. A silty, light blue river runs through the city center.

Our first night on the trail was at Les Houches, which was a short bus ride down the valley, but we wanted to get acclimated so we decided to take the trail down from Chamonix to Les Houches The day before we had done a short hike down into the valley from Mer de Glace, an ice cave at the end of a glacier, so we wanted a bit more before we hit the trail in earnest.

We filled our water bottles, packed up our gear, adjusted our poles and stopped at a pastry shop to buy breakfast and lunch. We took the telepherique up the mountainside to Plan Praz, where the paragliders jump off of a ledge, and we started the trail at 6,000 feet. We were headed up, straight up, up the side of the mountain. The trail zig-zagged over rocky switchbacks. There were no trees, nothing to stop a tumble down the bare mountain if you missed a footstep. I was breathless at first, and nervous about the edges of the trail and the dramatic drop off. I told myself to put one foot in front of the other. We stopped often for water and to see where we had been. Plan Praz fell away, and the houses in Chamonix looked like tiny toys almost a mile below. Helicopters hovered in the air beneath us. We were walking on the roof of the world.

We reached the pass at Le Brevent at about 7,500 feet. We could see into another mountain range beyond, mountains as far as the eye could see. There was a rock pile to one side of the pass, and our trail continued up the side of another mountain towards the peak. We rested for a while and then carried on.

We came around a corner and the ground fell away into a beautiful valley. We could hear cowbells clearly, but no matter where we looked, we could not see the cows. Finally I saw something else in the distance — two ladders straight up the rocky face of the mountain before us. I knew that there would be a few ladders on the tour, but I hadn’t realized we would come across them on the first day. I hadn’t prepared myself mentally for the ladders – I was afraid. But it didn’t matter, because they were there, and we had to navigate them. My attention became very focused on my hands and feet and each rung of the ladder. When we were finished, I breathed a sigh of relief.

After that, we continued to ascend, and finally reached the peak, where we could see down into an area with several lakes. We descended into the valley and crossed it to the point where we could see Mont Blanc and the peaks that surround it across the valley. The views were spectacular. We were as high as the peaks across from us. We ate ham sandwiches for lunch with a view of a nearby glacier. We watched clouds come and go across the mountaintops. It was as if you could reach out and touch the sky.

We spent some time eating and admiring the view, then we began our descent. The guidebook we had with us, by Kev Reynolds, described the trail down into Les Houches as “knee-wrenching,” and it was not kidding. The path was rocky, steep and winding. Occasionally there were iron rungs stuck in the rocks to allow hikers a grip to stop from falling. There were a few moments where I wondered what I had gotten myself into.

And then, after nine miles, we were in Les Houches. We stayed at the Hotel du Bois, which had an indoor pool, and we took a dip to ease the tension in our tired muscles. We had steak au poivre for dinner with fried potatoes and salad, and citron surprise for dessert, which Emile pointed out was a deconstructed lemon bar with pieces of meringue, bits of crust and a tangy lemon curd all on the plate together. It tasted like the best meal of my life.

The next day was the “official” beginning of our trip, according to our itinerary. But for us, the adventure had already begun.